Home / Articles / A Guiding Thread in the Underworld

The road is a very popular metaphor in many cultures. It can lead the hero to his goal and or create obstacles for the one who follows it. In the mining industry, everything is exactly the same as in fairy tales and myths. This is why the construction and operation of roads in underground mines are often one of the main challenges for the industry, especially since underground roads stretch for many kilometers.

The need for roads in mines might not have been so acute if not for the high water levels in many deposits. High humidity and floods lead to the fact that bulk roads quickly go out of service. This, in turn, results in several other unpleasant consequences.

«Roads with a leveling layer are quickly destroyed due to the inflow of groundwater and heavy vehicles; thus, ruts are formed. This greatly slows down the speed of the equipment, which, in turn, negatively affects the production volume.

Under such conditions, the mining company will have to bear the constant costs of road restoration, and this will lead to forced downtime of transport», commented Alexander Korotkevich, Head of the Technical Department of PRESTORUS LLC.

In some cases, downtime is far from the worst possible consequence. Roads without special coverage can shorten the service life of vehicles as the power consumption of the engine, fuel, and air consumption for ventilation increase. Moreover, industry experts emphasize that it is the unsatisfactory condition of the roads that leads to the rapid wear of tires on underground equipment. That said, the issue of road quality is relevant not only on the surface but also underground.

There are several options for solving this problem.

The mine staff can try to cope on their own, use hydraulic hammers and then level the ground. However, according to experts, that does not produce sufficiently effective results.

The most radical option is concreting, asphalt, or reinforced concrete pavements. This method, of course, is reliable but not cost-effective in some cases.

«The construction of permanent roads from concrete is a very time-consuming and expensive process. The speed of laying is low, and road construction does not keep pace with the pace of mining,» explained the speaker.

That is why concreting is used only at loading points, inclined ramps, and crowded sections of tunnels.

There is special equipment for leveling and milling haulage workings. However, it is rather expensive, and to put the entire road network in order, you will need several machines. Moreover, you shouldn’t forget about the maintenance costs and salaries of the drivers.

Considering the nuances mentioned above, the roads with crushed stone are the most universal, accessible, and widespread. However, the crushed stone crumbles over time, crushes, and you have to fix the road again. Such unresolved issues have motivated specialists to develop more advanced tools, such as a reinforced geocell.

«The basic principle of the geocell is to redistribute the vertical load on adjacent cells, which can significantly reduce the load on the underlying base. Simply put, it prevents the crushed stone from sliding apart since the «grains» are placed in separate cells, and each cell takes on the load separately. As a result, the road does not deform or loosen up—on the contrary, it becomes more solid and even.

The pavement design is chosen based on a calculation, and then the optimal cell sizes, section dimensions, and the thickness of the crushed stone layer are selected. The initial data include information on the width of the mine, its geological structure, rock parameters, axial loads from machinery, traffic intensity, and water inflow to the site», explained the Head of the Technical Department of PRESTORUS LLC. 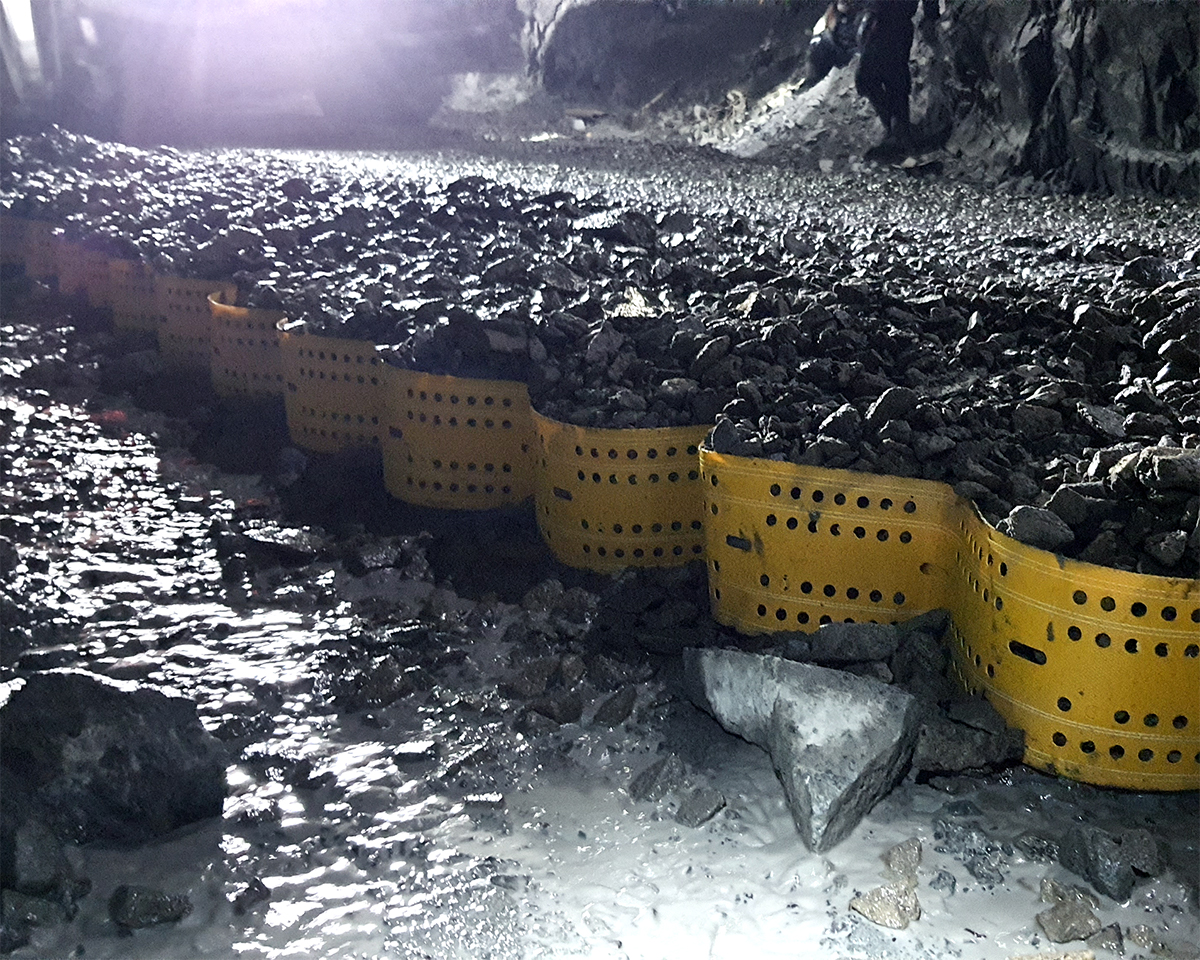 Finished road with the GEOCORD® reinforced geocell (a drainage ditch on the left).

The construction of such a road surface occurs in several stages. 3D geocells are mounted on the prepared underlying base made of softened rocks. Then drainage ditches are formed. Crushed stone of an adequate fraction is poured into the installed cells. After that, a grader levels the surface, it is compacted with a vibratory roller, and a protective layer is added using the wedge method.

The history of the application of the GEOCORD® reinforced geogrid began with two pilot sites at the Rasvumchorr and Kirov mines, which belong to the Kirov branch of Apatit JSC. The company was very satisfied with the effectiveness of this method and included road construction using reinforced 3D geocells in its investment program. As of today, over 12 km of roads with such a reinforced geogrid have been built at the mentioned mines. And the mining company is not planning to stop there.

What are the Benefits?

Yes, the method is simple and might seem less reliable than concreting. However, it is simplicity and accessibility that are the main advantages of 3D geocells.

Since the installation does not require any additional and special units of equipment and tools, the labor intensity of the work is significantly reduced (by 63.5%), as is the time for excluding working areas from the transport scheme (no more than 8 hours). Thus, financial costs are almost twice as low.

The mines can save quite a lot in the long term. Firstly, the vehicle speed will not suffer, which will positively impact the production volumes. Secondly, the resistance to rutting will help avoid additional road maintenance and vehicle repair costs.

Just because the product seems simple does not mean that its use should be treated with disdain. Otherwise, an attempt to save money can result in unwanted losses. Experts have noted several errors that can lead to the destruction of roads in underground mines.

«Typical mistakes include using crushed stone fractions less than 40-70 mm, the lack of drainage or drainage ditches. In such cases, the mining company simply will not get the desired result.

It is also important to arrange the upper protective layer above the geocell using the wedging method. Its thickness should be at least 5 cm both at the beginning of installation and during the entire period of operation. If the protective layer gets thinner and ruts appear, the road should be backfilled and graded. It is necessary, among other things, to constantly monitor the condition of the road, to maintain the operability and cleanliness of the drainage ditches», stressed Alexander Korotkevich. 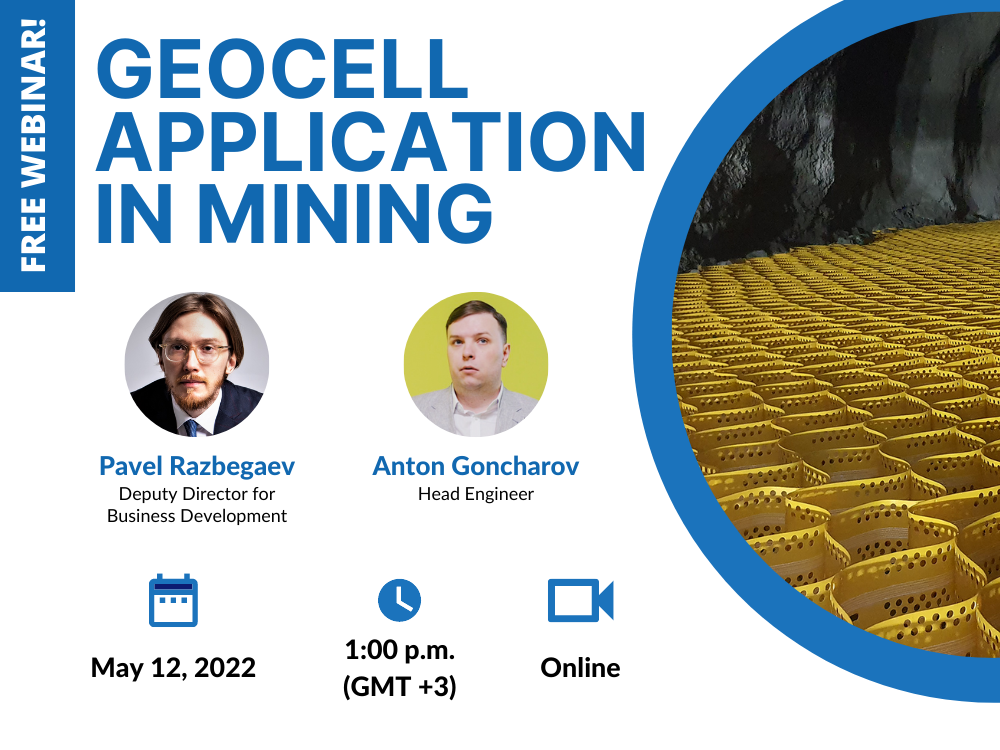 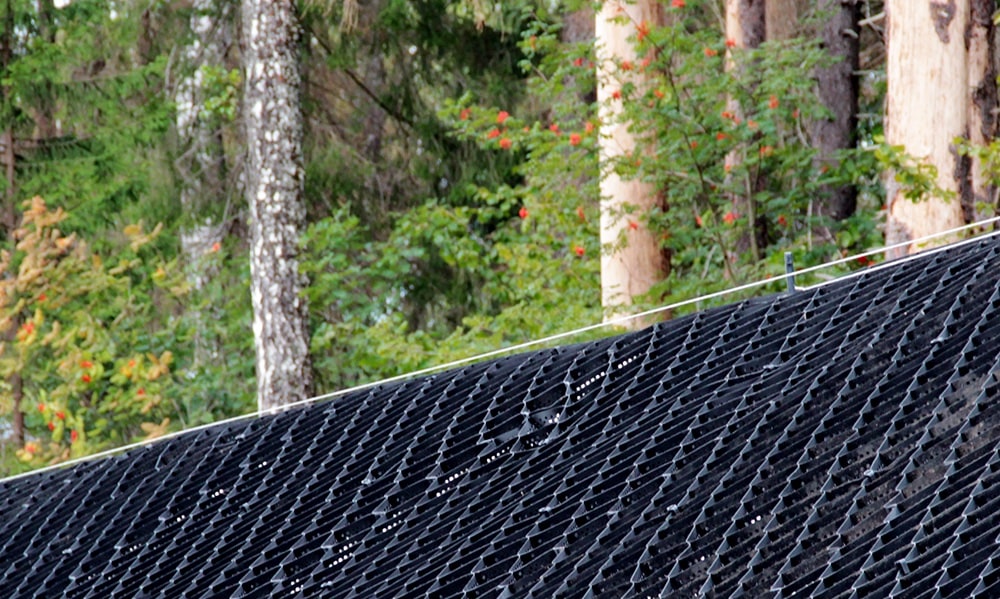 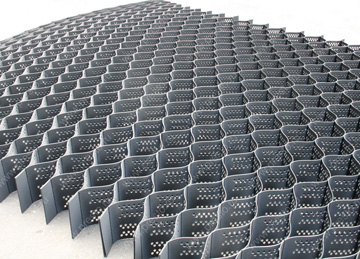 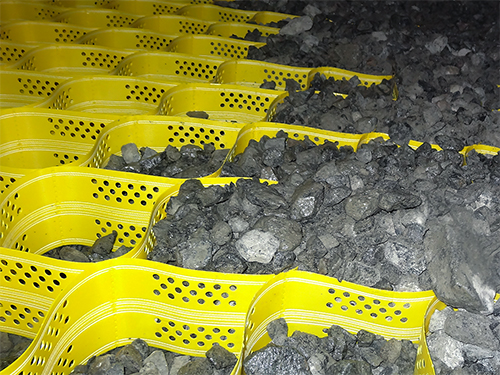